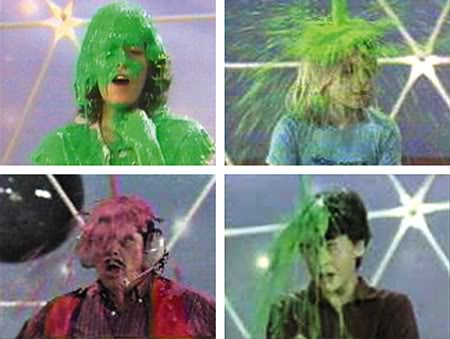 Today is the first day of the government shutdown and I am posting a review of a book about a TV network for kids. This is not a coincidence, it’s a statement.

7 of my favorite tidbits from Slimed!: An Oral History of Nickelodeon’s Golden Age:

As someone who was raised in part by Nickelodeon, whose tastes and aesthetic preferences were shaped by You Can’t Do That on Television, Out of Control, and The Adventures of Pete and Pete, I was easily lured by Slimed! An Oral History of Nickelodeon’s Golden Age. Author Mathew Klickstein’s book is at once ambitious and disappointing. Klickstein talked with nearly 200 former stars, producers, writers, directors, executives and other behind-the-scenes folks to paint a picture of the kids-focused cable network’s reign in the 20th Century. While there are a few gems sprinkled throughout the book, most of these fleeting successes are buried beneath the fact that the book’s structure is disorganized and its mechanics are frustrating.

For the uninitiated, the oral history format is one where the author interviews a bunch of people, and edits the interviews to construct a narrative. It looks like this:

John Doe: I was on Nickelodeon back in 1989, during what many consider to be its golden age.
Jane Doe: A lot of folks consider the 80s and 90s to be the golden age because we had a lot of creative control at that time.
John Doe: When I was on You Can’t Do That On Television, what we enjoyed most was the creative freedom we had, which led to a lot of hilarious sketches.

At its best, the oral history format works well for Slimed! a few pages at a time when it offers one story woven of many points of view. Legs McNeil‘s Please Kill Me! (Klickstein points to McNeil as an inspiration in the acknowledgements) is a triumphant model of this form. It doesn’t spend much time setting up the story of the rise of punk, as several of the arcs of it had been established in the public consciousness long before the publication of the book. Please Kill Me fleshed out that story.  Slimed!, on the other hand, reads like a 260 page Buzzfeed article in rough form — a series of loosely connected, if connected at all, anecdotes about a history not many know anything about. It fails to set up its story, or to offer any context for the anecdotes offered, and as such leaves much to be desired.

Slimed! is a collection of frustrations punctuated by the occasional funny or interesting story. The testimony from those featured in the book are woven into a lazy narrative. Because north of 95% of the names of those interviewed are unrecognizable, and because each of the chapters address exceedingly broad topics and are presented without any introduction or rationale for inclusion, the reader spends as much time looking up what role each of the 200 interviewees played at the station as they do reading the actual book.

Where the Slimed! occasionally succeeds is when it paints a detailed picture of the more dynamic occurrences at the station. Klickstein does a particularly good job of telling the story of why the creator of Ren & Stimpy was fired by Nickelodeon, why there were feuds between creators at Rugrats, and why said golden age was tarnished in the station’s transition into the 21st Century (this chapter, in fact, should have served as the golden standard for the rest of the book). These achievements, however, are few and far between. While I cannot imagine that structural difficulties will stand between diehard fans of the network and the revelations offered by this book, especially considering how instrumental Nickelodeon was in forming the taste of my generation. Unfortunately for Klickstein, it is more likely they will be exposed by way of the various list-constructed syntheses that have been popping up online since the publication of Slimed!

Klickstein’s acknowledgements make him come off as charismatic, knowledgeable, and SUPER INTO Nickelodeon, and the task of putting this book together was an admirably ambitious one. He talked with many folks, and the task of compiling a book like this one is monumental in scope. Klickstein acknowledges that there are more stories and anecdotes to work with for future editions of the book. In order to make future editions to be worth the effort of publication, I hope that he considers re-weaving together a narrative and doing so through the lens of a pop historian rather than that of a hyper-fan.

In other Nickelodeon news:

Clarissa Explains it All‘s Melissa Joan Hart has revealed that she was high on Ecstasy for her 1999 Maxim cover shoot and Big Pete (Michael Maronna) and Little Pete (Danny Tamberelli) now produce a podcast together, and the A.V. Club reports that it is actually pretty good. In Slimed!, Tamberelli reported that he and Maronna still see each other regularly and get along, though rarely go out to bars together because it leads to awkward fan interactions (understandable). I am happy to see them teaming up in this fashion.